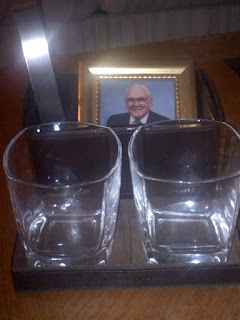 So I received a gift from my Dad this week and it brought quite a smile to my face. Since Dad passed away about 8 years ago, this calls for an explanation.
A box came to the house and assuming it was a gift for the kids from relatives "up North" I only opened it enough to see if the contents were wrapped. They were not, so I put it aside.
I opened it this morning and the mysterious box included a very nice Cutter & Buck glass bar set, rocks glasses and an ice tray with a letter from Old Forester thanking me for sharing my story with them.
I had forgotten about it, but a few months back, I entered a contest that Old Forester was sponsoring about the first time I tried their whiskey. So I related a story from many years ago, when I was in my mid 20s, and it was the first time I was in a bar with my Dad.

I don't remember the bar, or why it was just the two of us. I was "old enough" now, so I didn't want to just order a beer and I ordered a Bourbon and Coke. Dad taught me some valuable lessons that evening.

"Do you drink Bourbon and Coke often?" he asked.
"Sometimes," I said, "when I'm not having a beer."
"Well," he began, "you probably won't listen, but here is something to remember. Never order just Bourbon unless you know what their house brand is. Look in the well, the house Bourbon here is Old Forester, which is a good well whiskey. Don't mix whiskey with Coke, the sugar will either get you sick or give you a hangover. Mix with water if you're mixing. And always ask the bartender his name before you order. He'll treat you right if you treat him right."

I finished my Bourbon and Coke and had my first Bourbon and water afterwards - after introducing myself to the bartender (I think his name was Mike). Along with my order I asked him to give Dad another Vodka tonic. It took some getting used to at first, but I couldn't let on that the lack of sugar was stronger than my young palate was interested in.

Well I don't have the heart to Old Forester that I prefer Jim Beam now as my every day whiskey (and Irish whiskey for special occasions) but I will toast them, and the many lessons my Dad taught me, in my Christmas surprise.

Thanks Ol'Fo, and here's to you Pop!